In living through the nightmare that is, (possibly), the final stages of the UK being in the European Union, it is difficult to see outside of the political, media and social storm that is raging around us. Looking back on this post, after whatever Brexit becomes, readers will, I suspect, be aghast at just what the British public have allowed to take place in their name. Amidst the turmoil though, there is a beacon of hope that is lightening the depressing situation by poking a finger in the ribs of contemptuous politicians. That finger poking is coming from a group calling itself Led By Donkeys.

Over a pint in early January 2019, four friends discussed the idea of using billboards to quote politicians contradictory words about Brexit back at them. With MPs using Twitter as an immediate way to score points over their rivals with quick soundbite statements, the four realised they would have plenty of examples to choose from. As the talk of this being a humorous prank continued, they convinced themselves to look into it further. After some research, they found that £300 would pay for the printing of 4 billboards and the equipment they would need to hang them. Clubbing together, they decided to make the pub banter joke a reality. 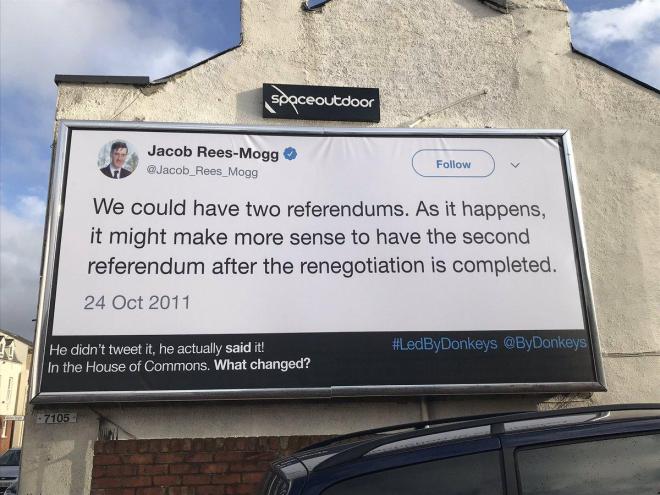 As working people with families to support, after their first foray into the night-time manoeuvres of illicit flyposting, they realised they couldn’t afford to keep this up, nor risk arrest for covering over other’s paid for adverts. So they decided to go legitimate and launched a Crowdfunder campaign, thinking they would be lucky to get the £10,000 limit they had set for themselves. With a Twitter feed promoting what they were doing, it only took 3 hours to raise an incredible £50,000. Very quickly they realised that they had hit upon a hugely popular idea.

And so this very modern day agit-prop campaign went viral. Booking billboards and getting their work legally pasted up, they could develop more of a coherent plan of action. They started strategically posting MPs words in their own constituencies, giving more power to the protest. In this, there was not only more chance of politicians seeing their words writ large for themselves, but it also directed attention of their double standards to the very people the MPs would be asking to vote for them at the next general election, (which it must be noted, could be very soon).

Led By Donkeys decided to stick with the Twitter format, even when quoting words that had been said on TV or in parliament. In doing so, by taking the visual language of social media off the screen and into the built environment, only to then have this reposted back to Twitter, created a satisfying feedback loop as they complete the circle.

Their ire wasn’t only aimed at government figures and Leave campaigners though, and in Hackney they targeted Jeremy Corbyn’s constituency. In responding to his avoidance of saying anything concrete about Brexit, they pasted an ironically blank Tweet. That they were able to do this and it still resonate with the general public, in itself, demonstrates how successful their campaign had become in such a short space of time. If Led By Donkeys had started with such an ambiguous hoarding, (excepting a Brexit hashtag), then its impact is unlikely to have been as powerful. What went before created the environment to give this visual play on Corbyn’s vacuous stance some agency. 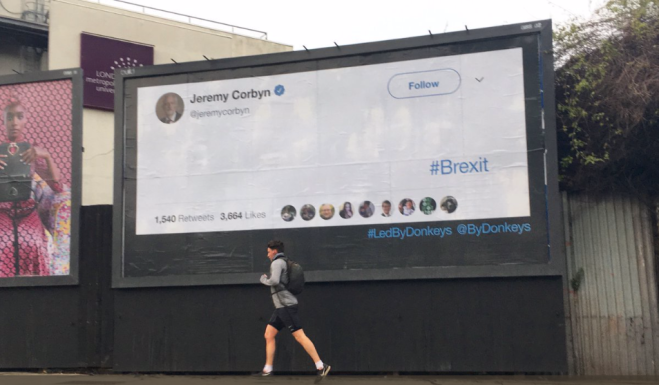 In posting Corbyn’s lack of words, they invited local Labour Party members to graffiti the empty space with what they thought he/Labour should be saying about leaving the EU. Hackney Council though, told them they couldn’t leave it up as it looked like it had been vandalised. Led By Donkeys solution: they had the graffiti’d poster reprinted with a frame and rehung.

For their next stunt they decided to repurpose the hateful Breaking Point poster launched by Nigel Farage during the EU referendum campaign in 2016. In an act of détournment, they pasted the faces of Brexiteer politicians, financiers and vocal supporters on top of the original faces, with the caption: “The UK is being swamped by a tide of incompetents.” That they managed to secure exactly the same van that Farage had used 3 years previously to showcase their work made the joke even more pertinent, turning the vile sentiment of the original Breaking Point on its head. 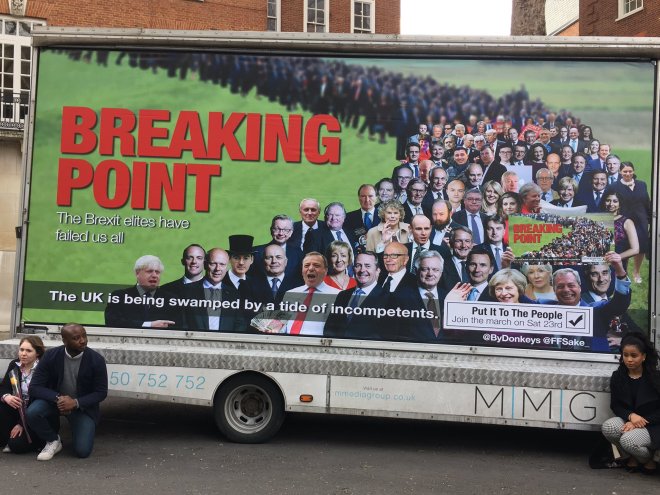 I suspect for many, like me, watching Led By Donkeys protest unfold in real time is helping to soften the despair felt at the situation we are witnessing in British politics—it is re-appropriating a positivity in its use of intelligence, humour and satire, during a highly charged and negative time. Arguments that satire is dead may be true when it comes to the liberal printed media, and radio and TV shows which try to extract a cheap laugh out of a sympathetic audience. Led By Donkeys though are demonstrating an unpatronising integrity when it comes to satire. More than that though, in a highly visible way,  they are showing the power of ‘do it yourself’ culture.

That they are constantly looking to see where they can take this protest next, live on social media channels, also adds an air of excitement and anticipation to those that are following their activities. This week alone they have been accompanying the Leave March, (whose strange Tesco Value styled posters and banners would seem an act of self-ridicule), with an electronic display asking Where’s Nigel?, after the ex-UKIP leader only showed up for the first day of the walk from Sunderland to London. 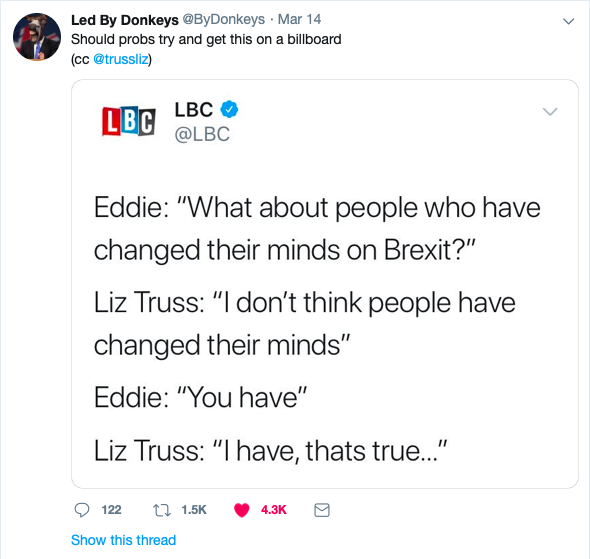 As I write this post, thousands of people are marching in London in support of a People’s Vote; an online petition to Revoke Article 50 reaches an unprecedented 4 million signatures in just 3 days; and the British public faces another week of ‘meaningful votes’ in the Houses of Parliament as Teresa May desperately tries to get her Brexit deal through for a third time. Having only three weeks ago given my annual agit-prop lecture to first year graphic design students, the timing couldn’t have been better to add Led By Donkeys to the slides. They can rightfully join the noble history of important protest groups that have held accountable those that seek to speak or act on behalf of others.

An image of one of Led By Donkeys’ billboards at the London People’s Vote demonstration, 23 March 2019.

Links:
Here is a link to an excellent interview in The Guardian with those behind Led By Donkeys, that informed much of this post.

You can support Led By Donkeys by giving them money here.