I think my iPhone hates me, it has recently been swapping the album artwork of one band for another.

This is very much a first world problem, I know. But it does feel very personal. My phone, for all its ‘smartness’, must know how important graphic design and music are to me. I use the Music app everyday of the week to listen to new and old sounds on my walk to work. I post and read about graphic design on many social media apps and blogs I follow just as often. My phone won’t know that it was album sleeves that got me into graphic design in the first place, but there are obvious clues. So forgive me if I feel aggrieved. 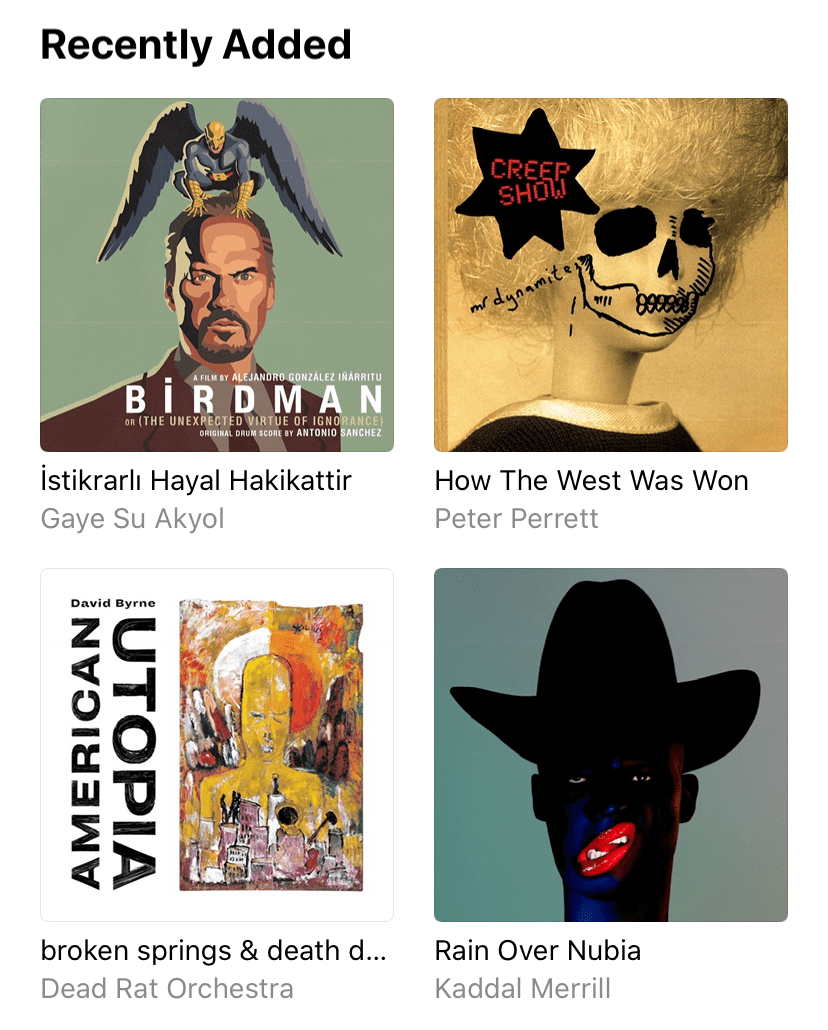 In the above screenshot of the ‘Recently Added’ section of the Music app, you can see the sleeve for the Birdman OST replacing what should be Gaye Su Akyol’s recent release. Likewise, a Peter Perrett album becomes Creep Show’s Mr Dynamite, while Dead Rat Orchestra become David Byrne and Kaddal Merrill becomes Young Fathers.

It is annoying not just because of the misrepresentation, but because I use the images for searching for the albums I want to listen to. I know this as a way of looking for music could be deemed outmoded, but that is how I operate my technology and I’m sure many others do too.

Albums downloaded from the iTunes Music Store stay properly appointed by their artwork, such as Bonnie “Prince” Billy and Metronomy, (see above), unlike my recent purchases of the extended versions of Stereolab re-issues.

I’ve narrowed the problem down, and it appears to be happening to CDs I’ve bought, ripped to my desktop machine, and then transferred to my phone. The replacement artworks are all on my phone anyway, even though some of these have also been purchased > ripped > transferred in the same manner.

It is an interesting conundrum that needles with my geeky sensibilities. I wrote on a previous blog some 6 years ago about my changing relationship with collecting physical musical artefacts due to evolving technology and marketing tactics; but this is more of an issue. Having a singular graphic that represents a collection of music accurately is still an important part of modern life for me; even if the art of the album sleeve itself is being killed off more generally as thumbnail images are all that are viewable on streaming services.

With the news recently that Apple are going to cease the ability to buy music from iTunes, and move to being solely a streaming service with Apple Music, does make me think I am going to have to completely alter ingrained habits. The Independent reported in June 2019, when discussing the firm’s move to kill off iTunes, that: “Songs bought through the iTunes Store will also almost certainly stick around, probably being present in the new version of the music app too. But it is unlikely Apple will integrate the store with that app in such a way as to allow people to make new purchases.” [my emphasis].

As a result of this news, and this recent glitch on my phone, I’m only half-joking when wondering if this is a deliberate move by Apple to try to break my record collector’s habits, for once and for all.

2 Replies to “My iPhone hates me”