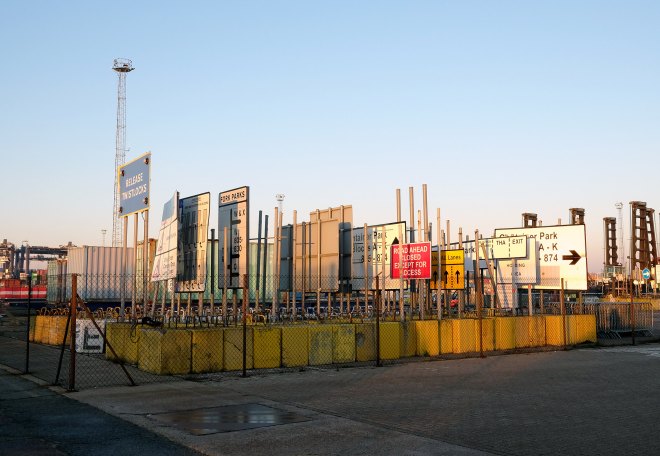 A couple of weeks ago I took the above picture at Felixstowe docks, finding it interesting to see a group of signs in what appeared to be a holding pen, waiting to be distributed as need-be around the busy port. After editing the image to post to Flickr at the weekend, I wondered what the collective noun was for a collection of signs, so I posted the simple question to Twitter. Below are some of the excellent replies I got.

@gray was the first off the mark with a reference to the Signs director:
A Shyamalan of signs.

Several took the theme of the communication problems of a lot of signs in one place, including: A confusion… (@Skipratmedia); A concussion… (@Johnctarpey); A directionless… (@zimboguide); An obscuration… (@mayhematics); An assault… (@Lestaret); A cacophony… (@peter_p_light): A confusion… (@Unionbuilt); and one of my favourites along these lines; A squabble… (@ZCDunnett).

On a theoretical level, A semiotic… makes sense, (@semajrabnud). That is if it wasn’t more suited to a collection of signals.

A directory… (@SuchAndSuchDes); A tell… (@MrBoyce); and A trail… (@thepublicartco) all nicely chime with signage’s purpose.

Given their upright nature, A forest… fits visually, (@jrooneyresearch), and this was confirmed as a term used in Germany, or rather ‘Schilderwald’, which translates as ‘a forest made from signs’, (@StefanH145).

However, the one that I think is probably gets the prize, if there was a prize, is simply: A shitload… . Thanks to @JulianDGomezZ, a genuine laugh out loud from me for that response.

Thanks to all who have given some excellent suggestions so far, there are far too many to mention here, (especially if you go sideways and look at the replies to retweets). To follow the post, click here.

And thanks to Justin Hopper for pointing me in the direction of this: